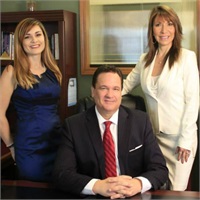 The James Financial Group is a Financial Services Firm that has been providing independent and objective financial guidance to clients since 1996. Founder and President of the Group, Carey James followed in his father’s footsteps, a Financial Advisor Representative in the Bay area and started in the business 31 years ago. Mr. James began his career working at a large wire house and quickly became very successful in the business. But the industry landscape began to change and Mr. James realized that he would be better able to serve his clients by starting his own independent firm where he would be able to offer independent advice devoid of corporate pressure to sell certain commissioned “in house” products. The Firm has evolved over the years and the name has changed, having formerly been known as “James & James,” and “Carey James & Associates” prior to becoming "The James Financial Group," but the core foundation of placing clients’ needs first has remained unchanged. Mr. James’s wife, Diane James joined the team as the Vice President in 2009 followed by her daughter, Tiffany who works as the Administrative Assistant and Carey’s daughter Jaquelyn James who now works as an Investment Adviser Representative and partner. Each of the group’s advisers has extensive personal and professional experience and many hold various professional designations.